Scientists led by Peter Doran of the University of Illinois have found by monitoring long term temperature readings that the continent Antarctica is actually cooling .Averaging the temperature readings from the more numerous stations on the Peninsula has led to the misleading conclusion that there is a net warming continent-wide. "Our approach shows that if you remove the Peninsula from the dataset, and look at the spatial trend. The majority of the continent is cooling," said Doran. 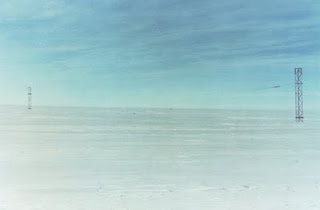 The  Warmista have tried very hard to prove that Antarctica was warming including some very creative maths recentlly by Steig. For those of us who just like to make up our own minds here is a picture of a 115 foot transmission tower built by ITT in the mid sixties . Only 30 feet protrude in the late eighties and that is 85 feet of additional ice.
Correction to reader Anonymous , the picture posted was of a crane not pylons. It has been corrected now.
Posted by Baron at 8:31 PM