Penguins in Antarctica to be replaced by jellyfish due to global warming???

Adding to the huge list of AGW caused disasters, in the Telegraph we read : The results of the largest ever survey of Antarctic marine life reveal melting sea ice is decimating krill populations, which form an integral part of penguins' diets.

The six-inch-long invertebrates, also eaten by other higher Southern Ocean predators such as whales and seals, are being replaced by smaller crustaceans known as copepods. 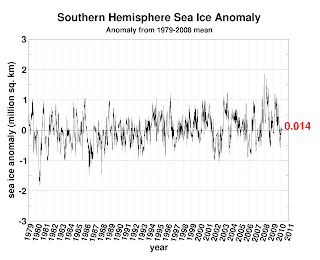 These scientists are not the sharpest tools in the shed as a quick check shows  Antarctic sea ice has been increasing for decades .
Posted by Baron at 9:35 PM