American Thinker shows how US temperature readings have been selected/modified for a warming bias and the evidence of tampering  is damning when an 11 year average is taken for each of the station groups across 48 states. This part of a general re-writing of data retrospectively to fit alarmist "science"

The most accurate  readings are obviously  the rural readings as they are not contaminated by UHI.
The Temperature Adjusters do not limit their activities to the US as complaints from the Russians are similar.
If there was no significant warming in the US  over 100 years it beggars belief that the world was going in another direction.
We have also, courtesy of Hide the Decline a National Geographic picture of the Northern Hemisphere temperature profile - not much like the "adjusted version" is it?

And lastly from the IPCC itself in 1990: 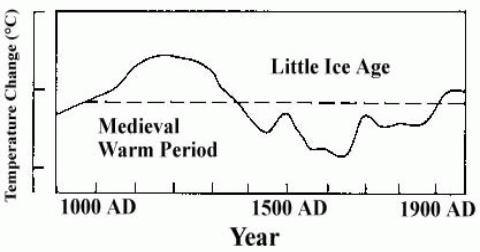 All these graphs are now "adjusted,corrected and massaged" to agree with the Global Warming view of science and are now unrecognisable in comparison to the original.
Posted by Baron at 11:19 PM