Carbon Capture Industry Worth Up To 6.5 Billion in 2030 - By the Brothers Grimm 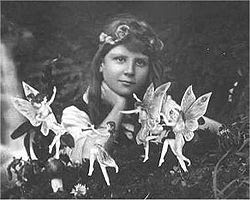 Another fairy tale from the fertile minds of the Department of Energy and Climate Change in the UK. No one apparently has told these turkeys that commercial carbon capture has never been done, is an engineering impossibility that is not worth doing anyway and exists only in the minds of bureacrats eco-nuts and those who will get the billions for research . The picture is of the Cottingley fairies which are just as real as the Carbon Capture myth.The Unicorn declined to be photographed .How much cash does the UK have with all the billions being offered for one crackpot scheme after another. When are Uk voters going to say "Enough"
Posted by Baron at 10:22 PM