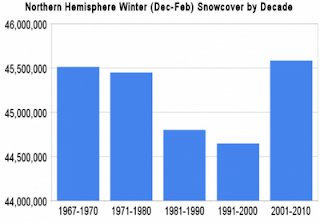 From WUWT and Steve Goddard who tell us that the last decade in the NH had the most snowfall on record .  Of course it is fascinating to read the global warming experts from 2000 predicting the " demise of snow"

Michael Jeacock, a Cambridgeshire local historian, added that a generation was growing up "without experiencing one of the greatest joys and privileges of living in this part of the world - open-air skating".

Warmer winters have significant environmental and economic implications, and a wide range of research indicates that pests and plant diseases, usually killed back by sharp frosts, are likely to flourish. But very little research has been done on the cultural implications of climate change - into the possibility, for example, that our notion of Christmas might have to shift.
Professor Jarich Oosten, an anthropologist at the University of Leiden in the Netherlands, says that even if we no longer see snow, it will remain culturally important.
"We don't really have wolves in Europe any more, but they are still an important part of our culture and everyone knows what they look like," he said.
David Parker, at the Hadley Centre for Climate Prediction and Research in Berkshire, says ultimately, British children could have only virtual experience of snow. Via the internet, they might wonder at polar scenes - or eventually "feel" virtual cold.
Reading this would give skeptics  great amusement if it weren't for the fact that the same expert's current predictions are still being believed by a gullible public who should not be duped again.
Posted by Baron at 12:31 PM