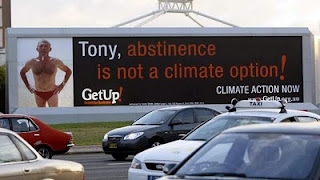 The Daily Telegraph reports on a giant billboard of Tony Abbott erected to oppose the Coalition's Global Warming policy. It may backfire as Abbott has been quite happy to push his super-fit image as part of his electoral campaign and probably would have donated if asked.. The billboard cost $100,000 which was raised by donations from believers.
Posted by Baron at 8:42 PM