"Become the change you want to see in the world." Al Gore

Al Gore quotes Gandhi  in that we should become an example to the world in the way we live our lives  .Gandhi himself adopted a simple, ascetic way of life, dressing only in a loincloth of handwoven cloth and sandals. He was jailed several times and went on hunger strikes to focus attention on his cause. 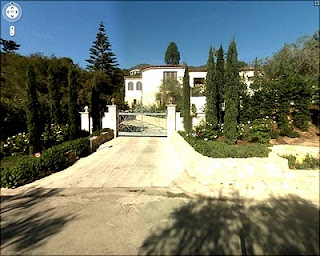 Now quoting Gandhi and talking the talk is quite different from walking the walk and Gore is the ultimate hypocrite in this regard. Hunger strikes ,loin cloths and sandals are obviously not his bag and he would never be accused of asceticism with his latest purchase of a five bedroom nine bathroom seaside shack with 6 fireplaces and a swimming pool. I guess the 6 fireplaces could represent an emissions problem but I'm sure Al's carbon credit company could arrange for a few trees to be planted in Botswanaland or somewhere just as remote to square the ledger. Being a modern day doomsday prophet is tough but I guess someone has to do it. He can be gratified that he is not the only celebrity to be suffering for the cause with Sheryl Crow limiting herself to one sheet of toilet paper and poor old Harrison Ford restricted to only flying one of his seven planes at a time.
Posted by Baron at 7:41 AM