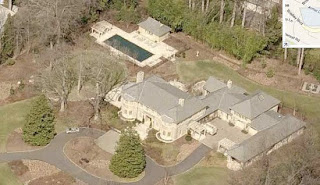 Thomas Friedman never tires of advising others how to reduce carbon emissions while living in a house the size of Buckingham Castle! His latest "original" idea is to try to steal the tea party concept for the green movement with his Green Tea Party proposal.
This is a complete knock-off from the Tea Party movement - a type of organisational plagiarism - even down to the throwing of kegs of evil imported oil into Boston harbour. He advocates a Patriot tax on imported oil to reduce the deficit.
I’d be happy to design the T-shirt logo and write the manifesto. The logo is easy. It would show young Americans throwing barrels of oil imported from Venezuela and Saudi Arabia into Boston Harbor.

The manifesto is easy, too: “We, the Green Tea Party, believe that the most effective way to advance America’s national security and economic vitality would be to impose a $10 “Patriot Fee” on every barrel of imported oil, with all proceeds going to pay down our national debt.”
America now imports about 11 million barrels a day, about 57 percent of our total oil needs — mostly from Canada, Mexico, Venezuela, Saudi Arabia and Nigeria. As T. Boone Pickens told Congress the other day: “In January 2010, our trade deficit for the month was $37.3 billion — $27.5 billion of that was money we sent overseas to import oil.”
If we put a Patriot Fee on all of those imported barrels, we would use less, cease enriching bad regimes, strengthen our own dollar, make the air cleaner and the climate more stable, foster the exploitation of domestic and renewable energy sources, promote electric vehicles, help bring down the global price of oil (which hurts Iran and helps poor Africa), and we could use the revenue to shrink the deficit. It’s win, win, win, win, win, win ...

Of course the thing he doesn't say is that the US has plenty of oil, which is untapped because of pressure from radical environmentalist groups supported by Friedman and his column. I think that Mr Friedman should go and sit in his huge house and see if he can come up with an idea that is actually original!
Posted by Baron at 8:40 PM