Lancaster University   is installing 2 x 2.5 MW Wind generators at a cost of  7.4 million pounds to "meet the energy  requirements of all 7000 students." The biology department will also save money with a plentiful supply of bird carcasses for dissection,resulting  from the 300Km per hour blade tips! 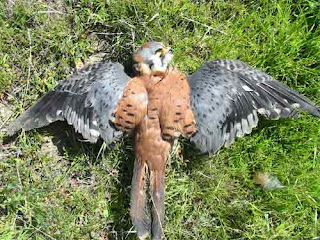 The largest UK university wind turbine project in the country, costing £7.4million, is to meet the energy needs of 7,000 students

The project, comprising two 2.3MW turbines, will cut carbon emissions at Lancaster University by more than 38 per cent and meet the electricity requirements of all the students living on campus.
How this project will "meet the  energy needs" of anyone when the winds aren't blowing escapes me but I 'm not an academic. Wind generators for a site have a load factor which is the percentage of the nameplate energy produced on average, varying in the UK from 7% upwards with an average of 27%.
With regard to reducing emissions studies have shown that introducing wind power to a power grid can actually increase carbon emissions due to the need to provide fast start spinning reserve which is usually much less CO2 efficient than base load generators.  Backup reserve has to be to the nameplate rating which means on average four times the actual wind energy produced so a 2.5 MW turbine needs 2.5 MW of backup while actually only producing an average of 600Kw of power.With this distortion of an efficient power grid and the wind subsidies offered, costs to the average UK consumer have risen at least 60 pounds per year so far, and this falls on those least able to afford it - the poor and disadvantaged.
These calculations seem to be beyond the intelligentsia who seem not to understand the total cost of the project or the cost to the community of subsidised "green energy". Someone has to pay!
Posted by Baron at 6:21 AM