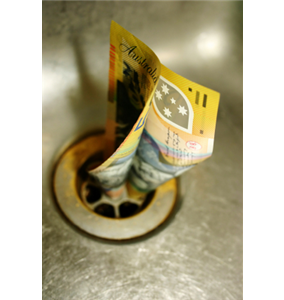 From Channel News we find that 43 billion dollar National Broadband Network , created without a business plan from a Rudd sound-byte is to have $16 million spent on advertising to convince the public how great it is, even if the parliament doesn't and probably won't pass it. The major telecommunications company in Australia, Telstra, does not want a bar of it in it's present form and the most optimistic financial analysis is fairly gloomy.

It's built yet nor has its multi billion budget been approved in the Senate, yet despite this the Rudd Government has backed a $16M dollar advertising spend for the National Broadband Network, in an effort to convince voters that spending an estimated $43 Billion dollars on a new fibre broadband network is a good thing

Melbourne based advertising agency Clemenger is beloved to have won the NBA account after a pitch with Y&R, BMF, DDB, Singleton Ogilvy & Mather and incumbent George Patterson.
According to the Australian newspaper a spokeswoman for Communications Minister Stephen Conroy has confirmed the appointment of Clemenger as the advertising of Choice. This is the same agency that won the recent Toshiba account.
What has not been explained is how the $16M expenditure on advertising will benefit Australians if the Tony Abbott led Opposition block expenditure on the proposed network in the Senate.
One of the major points not considered is what direction future internet technology will take with wireless rapidly encroaching on traditional brosdband sales.
Another Ruddy disaster in the making!
Posted by Baron at 9:05 AM