A few days ago, a carbon-emitting, climate-controlled 737 whisked me from one Washington to another, leaving the naturally air-conditioned paradise of a summer in Seattle for a plunge into Hades on the Potomac.


During a stroll around the capital, I sweated through two shirts, drained a liter of water, asked a guy who was hosing his dog to give me a spray. The humidity stung, like fevered hornets on the skin. As a lifelong West Coast weather wimp, I kept thinking: how does anyone live here in summer?
Around Capitol Hill, I could not find what I was looking for: agitprop from the number one global warming denier, Senator James Inhofe, Republican of Oklahoma. In February, remember, during a record snowstorm, Inhofe’s family constructed a primitive igloo
The snowy winter day was followed, all too quickly, by the hottest spring in Washington history. And then, early summer brought a spate of grim heat records around the globe. Kuwait, Saudi Arabia, much of Africa, Russia — all posted their hottest temperatures of all time, accompanied by forest fires, water shortages and crop failures.
So we have a snowy day when Sen Inhofe built an igloo followed by a huge list of disasters. 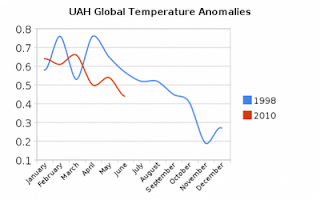 Oddly enough the disastrous winter in Mongolia doesn't get a mention or the people currently dying of cold in South America. Mr Egan also hasn't consulted the satellite record which does not agree with June being the hottest month although the doctored land-based records say so!
However Mr Egan is a true "liberal" when he says he wants the Government to stop him from using excessive carbon instead of choosing to do it himself!
As a citizen of a country that uses more energy than any other, I contribute to the carbon cycle with everything I do, from eating cereal that needs fossil fuel to get to market, to riding on the jet that delivered me from one coast to the other.

But I rely on the experts, those people who’ve devoted their lives to understanding changes in the earth’s temperature, to guide political leaders, and ultimately get me to join the rest of the planet in trying to keep us from slow-cooking ourselves to death.

I have to agree that it is a waste of carbon to fly across America to write twaddle like this!
Posted by Baron at 1:39 PM