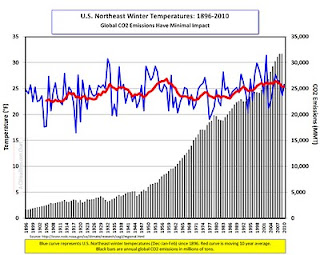 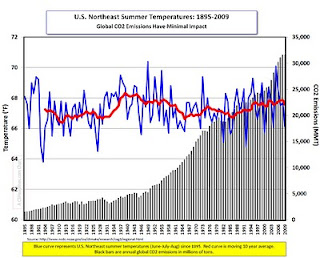 C3 as usual has an excellent post on the Global non-warming of the US which is contrary to what Obama and the Democrats would have us believe. The graphs shown are not from skeptic sources but from NOAA itself - Global Warming Central!
Democrats and the Obama administration will attempt just about every falsehood and any misrepresentation in efforts to pass some form of the global warming, cap and trade, energy legislation. As long as the mainstream media refuses to do any fact checking, the global warming B.S. will continue.

A recent example of the propensity to mislead and falsely claim is the Democrat's web site pushing the Waxman-Markey cap and trade legislation. On that site, they misleadingly state what global warming is supposedly doing to areas of the world, including the Northeast region of the U.S.:
"If the current rate of heat-trapping emissions continues, by 2070 summers in Boston will feel like those of South Carolina today. By the end of the century, temperatures could rise up to 14 degrees Fahrenheit in the region. Cities across New England, which historically experience only one or two days per year above 100 degrees each summer, could average 20 such days per summer, while more southern cities such as Hartford could average nearly 30 days. The character of the seasons will change significantly. Spring could arrive three weeks earlier, with summer lengthening by about three weeks, autumn becoming warmer and drier, and winter becoming shorter and milder."
Okay, based on actual empirical evidence, are any of the above GW claims likely to happen within the next 60 to 100 years. In a word, NO. The linked postings above clearly document the global warming lies (or, if you prefer, the wildly speculative, irresponsible predictions with no basis in reality) on the Democrat's site. An example is the statement that the Northeast region's temperatures may rise 14 degrees by 2100. That claim is so outlandishly bogus it becomes synonymous with an outright lie.
In a further examination of the data, the charts below show the impact of the huge amounts of global CO2 emissions on U.S. Northeast regional summer and winter temperatures since 1895. How big was that impact? Well, as the charts depict, just about squat. And whatever squat Northeast warming has occurred is most likely explained by a combination of natural forces and land-use forcings, not human CO2 emissions. And by the way, note both charts reveal 10-year average temperatures (red curve) being higher prior to the 1970's.
Why do politicians get away with the bullstuff lying like this? Easy. One, because the mainstream media isn't doing their job; and two, the politicians have basically bought the silence of the majority of climate scientists - one can't bite Uncle Sugar Daddy's hand and expect to prosper. (click on images to enlarge)
The amazing thing about the Global Warming scam is that the best temperature-metered country in the world ,the US, has shown virtually no nett warming over the last 100 years and the data clearly shows the nineteen thirties were as warm or warmer than the present. The graphs tell the story.
Posted by Baron at 10:40 AM