"Scientists" analysing data from the Terra satellite ,in a rush to blame CO2 for a planetary vegetation decline have ignored the most obvious reason for such a drop! 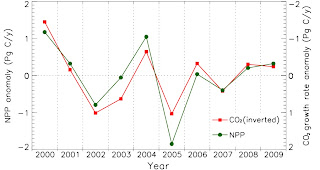 These  scientists have found that after a decade warming and  increasing plant growth (6%) the last decade has indicated a slight drop in worldwide plant growth (1%) and therefore it must have been caused by global warming induced droughts . Of course I am happy to see that the results they have obtained correspond exactly with a slight cooling trend worldwide over the last decade which has been documented by skeptics time and again.  This analysis suffers from the garbage-in garbage-out problem in attempting to correlate plant growth with a faulty temperature record. As a former nurseryman I know how sensitive plant growth is to temperature and the satellite results are no surprise and seem to be tracking the real temperature record .
Posted by Baron at 2:19 PM