Big Arnie to Help other Governments to Go Broke as Well!

It seems that misery loves company and Arnold Swartzenegger , following his  huge success in impoverishing California , has set up an international climate change organisation to assist others to do the same! It is a bit like getting Bernie Madoff to help set up your superannuation investment scheme. 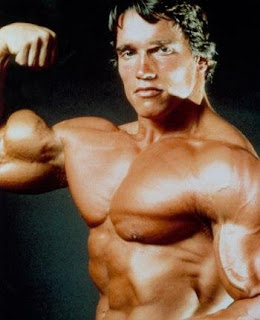 Gov. Arnold Schwarzenegger on Tuesday launched an international organization to tackle climate change with leaders from regional governments in Europe, South America, Africa, Asia and the United States.
The failure to achieve an international climate pact in Copenhagen last year left many people discouraged, Schwarzenegger said, addressing several hundred delegates to a "climate summit" at UC Davis. But now, he added, "The sub-nationals should do their work.... The green revolution is moving forward full speed ahead without the international agreement."
Unfortunately many of the invitees must have checked Arnie's financial management credentials and as a result stayed away in droves.
Despite Schwarzenegger's cheerleading, the signing ceremony for the Regions of Climate Action group, known as the R-20, had a lame-duck quality. Only one other U.S. governor, outgoing Democrat Jim Doyle of Wisconsin, was present for the signing in the half-empty auditorium; no provincial leader from China, Earth's largest carbon-emitter, agreed to join the effort.
California is a salutary lesson to all those who want to follow the Green watermelon  ideology to it's logical conclusion which is an economic death spiral .
Posted by Baron at 8:29 AM