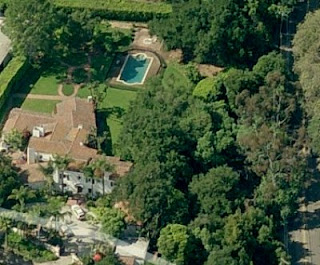 Al Gore has been making headlines again in the Huffington Post :
"It is a moral issue," Gore told the crowd gathered at the Aspen Institute, whose campus sits below hillsides turning red from beetle kill, "and we have to be as a generation willing to stand up and do the right thing."
Was Al  doing the right thing last year in buying a 10000 m2 house while poor people cannot afford to pay for   power which has skyrocketed in price due to "green" policies . Gore has made a fortune as a global warming carpet-bagger and must have the hide of an elephant to again appear in public following last year's unfortunate revelations and the obvious hypocrisy of his global warming stand asking people to sacrifice living standards while he is living in a castle! When I want a lecture on what is moral I don't think Al Gore is a person I would ask.