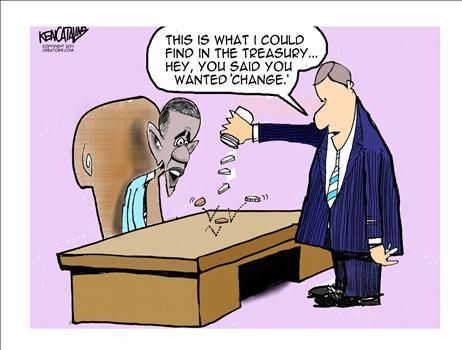 The latest report from the  Obanana Republic is an impasse in negotiations on raising the debt limit with the Republicans standing by the ridiculous  ( to the Democrats) idea that spending cuts should at least match the increase in borrowing- a principle that is anathema to the big spending Obama.
The GOP-controlled Congress has a clear mandate to cancel Obama's credit card with the large conservative vote in the last election .


BARACK Obama has vented his frustration at the Republican Party leadership for walking away from debt crisis negotiations after the White House offered what he called an "extraordinarily fair deal".
Racing against time to avert a debt catastrophe, the US President said today that his bottom line was now to avoid a default by increasing the US government's borrowing limit until 2013.
Mr Obama's comments came at a special appearance at the White House following confirmation from Republican House Speaker John Boehner that his party could not accept a compromise deal on reducing budget deficits offered by the President.
Republicans have refused to legislate an increase in the US government's $US14.3 trillion borrowing limit without huge cuts to government spending over the next decade.
The President said he had confidence that the debt ceiling would be raised because to do otherwise would be irresponsible.
Republicans are insisting that spending cuts must exceed the amount of additional borrowing authority granted to the US government above $US14.3 trillion.
No increase by August 2 would leave the US Treasury unable to service its debt and pay for 40 per cent of government services.
Financial calamity is predicted to follow with interest rate rises and market turmoil possibly the start of a slide into another recession.
Mr Boehner told House Republicans in a letter today that Mr Obama was "adamant" about increasing taxes and claimed he would not make fundamental changes to government entitlement programs.
"For these reasons, I have decided to end discussions with the White House and begin conversations with the leaders of the Senate in an effort to find a path forward," he said.
Posted by Baron at 11:37 AM