Wind generators ,those bird-chomping, bat-crunching, taxpayer-fleecing monstrosities  are now causing farmers health problems. They are not only a blight upon the landscape apparently they are also a blight upon nearby farmers. 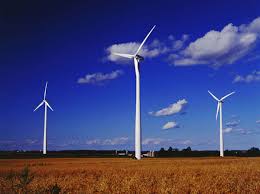 FOR the prime minister, wind farms are the stars of Australia's clean energy future, but health problems from the turbine noise are forcing some neighbouring residents off the land.
At the opening of the Gunning Wind Farm in southern NSW last week, Prime Minister Julia Gillard championed the environmental benefits, job creation and economic benefits that would flow from getting on the wind power bandwagon.
Currently, wind farms power two per cent of Australia's energy needs, and the government wants to increase it to 20 per cent by 2020 - or 3200 new wind turbines.
At Gunning, Ms Gillard brushed off concerns about health risks and said she had not received any advice about their dangers.
"I've stood underneath these wind turbines and they're remarkably quiet," she told reporters.
But some residents in a small Victorian farming community are claiming the noise from nearby turbines has made them sick and subsequently forced them off the land.
Wind turbine syndrome has been the subject of an overseas study and I don't think we have heard the last of it in our litigious society.
Posted by Baron at 10:14 PM