Carbon Tax - We All Pay! 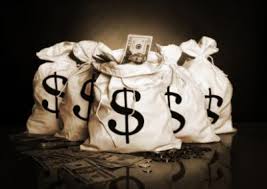 The carbon tax will collect an estimated 11 billion dollars and according to Gillard only 5 billion will be returned to taxpayers.  The big question is who will pay the other 6 billion dollars. "Only the big polluters" brays Gillard  as if these big "polluters" such as power stations will just cop the tax and not pass it on to consumers, stiffing their shareholders in the process. Yeah,right!
The real story is that the whole 11 billion is to be ripped from tax-payers one way or the other which is something Aussies intuitively know and this expensive income re-distribution scheme  by Labor will fail.
Jo Nova has examined the "benefits" of the Carbon Tax and the 10 Billion Green Fund!

1)For $11 billion dollars a year you get almost as much electricity (except at night time, early morning, late afternoon, and on cloudy, windless or extra windy days.)

2)You are providing a guaranteed market for a product no one in their right mind would buy! (This is the Labor “free market solution”.)

3)You give people “Hope”! Hope that someday, the people profiting from selling you a product that isn’t very good, will pay for the research to figure out how to make it worth buying!

4)Then whoever that smarty pants country is, will sell this back to us, making even more profit because they own the patents. Good for them. (Who said Australia was just a Quarry?)

5)In the end, remember that only the top 500 “polluters” will pay, and wait for it, if they are a business(what corporation isn’t?) according to the Honorable Combet they will not be affected because the tax is cleverly designed to be “competitively neutral” and quote: “it is not expected that companies will have to absorb the costs” (ie, they’ll all hit the consumers for the bill).

6)Even most consumers won’t have to pay! Only things that move, grow, light, or change temperature will cost more, and 90% of people will get more compensation than they pay. The other 10% (i.e. what’s left of the workforce) will cover all the extra costs of the Tax-on-everything. They’ll also earn the money to pay compensation to 90% of the country.

Thus the entire country can vote to live off 10% of the workers (at least ’til they leave the country*). The efficiency!

Pause for a moment to admire the penetrating insight of this master plan. The acute sagacity!

It’s so obviously the path to wealth, it’s a wonder no country thought of it before?

7)Apart from the economic advantages of paying more for less, the icing on the cake is that you can enjoy what’s left of your wealth, guilt free. You may not be helping feed starving children today, but you know that you might save one in 2100. After all, a foreign committee, with the best scientists Greenpeace could find, say their death is foreseen in the models — and we believe them.

8 ) Australia’s brave action will forestall the 4 degree catastrophic disaster by 6 or 7 minutes. More importantly, it will convince other entities (e.g. USA, India, China) to take up a global trading scheme to buy the same inefficient, expensive products. These countries, respectively larger by 15, 40 and 65 times, have been waiting for the signal that an economic miracle has begun.

9) Thus and verily, many jobs will be created, the Earth will cool 0.0007 degrees, storms will be stilled, the average rainfall will rain, and sea-levels will drop half a millimeter! That glorious perfection will allow the Great Barrier Reef to stretch to Hawaii, spawning a 5,000 mile archipelago to house homeless millions on the new tropical atolls which rise from the sea.

Halleluiah!
Posted by Baron at 2:22 PM