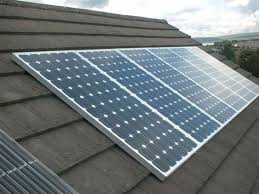 The latest article in Joe Romm's Climate Progress reaches a new intellectual low which is difficult with all the competition on that site for the title. The claim is made that if the US was foolish enough to install solar at the same rate as the Germans then it would be a 100% solar utopia by 2026 with everyone's home completely powered by renewables except on cloudy days and at night and in the mornings and late afternoons. We could all pretend that the new fossil fueled power stations running 24/7 as backup don't exist in this Rommantic Green wonderland of the future. We could also pretend that the crippling cost of this part-time energy is OK because it is "green" and anyway US can borrow heaps more dollars from China for such a good cause and avoid using all that cheap coal like the silly Chinese are doing. .


The Germans have installed over 10,000 megawatts of solar panels in the past two years, enough to power 2 million American homes (or most of Los Angeles, CA).  If Americans installed local solar at the same torrid pace, we could already power most of the Mountain West, could have a 100 percent solar nation by 2026, while enriching thousands of local communities with new development and jobs.
The following map shows what could have happened had the U.S. kept pace with Germany on solar power in the past two years (installed the same megawatts on a per capita basis).  Sunshine could power 10 states!
It is claimed that 10 million jobs would be created by such a solar industry although there is little detail on who would be paying these extra workers as we would still need all our fossil fuel workers as well to provide the real power. Maybe the Chinese credit card could be swiped for that as well.
Such local solar power also provides enormous economic benefits.  For every megawatt of solar installed, as many as 8 jobs are created.  But the economic multiplier is significantly higher for locally owned projects, made possible when solar is built at a local scale as the Germans have done.
With local ownership, making America a 100% solar nation could create nearly 10 million jobs, and add as much as $450 billion to the U.S. economy.
The Germans have found the profitable marriage between their energy and environmental policy.  It’s time for America to discover the same.
The guest article becomes too much for even Romm himself and he says that maybe a smidgen of nuclear or natural gas power will be required to "keep the lights on". Romm also states that Germany , the shining example , "isn't even very sunny" without seeing the stupidity of installing solar in such a low insolation environment.
JR:  I would note that Germany isn’t even very sunny compared to most of the United States. Now I’m not one to say solar can or even should have to power the country by itself.  We’ve got hydro, of course.  And I don’t have a problem keeping those nukes running for baseload.  And some natural gas to assist with demand response in keeping the lights on.