The Force be with you! 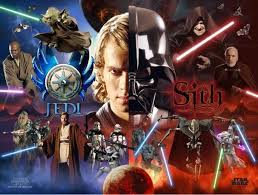 It appears that over 15000 Jedi Knights have registered in a recent Czech census .They should be  conscripted in our on-going battle with the Darkside  and the evil Pachauri and his minions on the IPCC Deathstar.


MORE than 15,000 Czechs follow the faith of the Star Wars movies' Jedi knights, they have told the official census, while half of the country's 10.5 million people declined to list any religion.
"Many people adhered to the moral values of Jedi knights from the Star Wars saga," the Czech Statistical Office said, noting that the invented faith also had a strong following in countries such as Australia, New Zealand, Canada and Britain.
It said 15,070 Czechs registered as Jedi knights in the census held in March, against 1,083,899 Roman Catholics and 707,649 people who said they believed in God but did not belong to any church.
"Fifteen thousand adherents, which is the size of a small town, is not a negligible social phenomenon," Stanislav Drapal, deputy head of the statistical office, said.
Posted by Baron at 9:15 AM