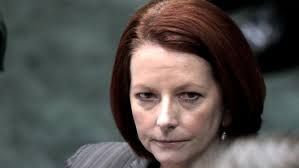 Julia Gillard has cynically called a meeting of Labor's backbench ostensibly to come up with some new ideas for her struggling government. This will have the dual purpose of placating restive backbenchers by giving them something to do and trying to give the illusion of motion to voters using the medium of butchers paper and felt pens, ironically used in  kindergartens for expression of ideas . I wonder if the best ones are going up on Julia's refrigerator. Of course the best idea for Australia would be to scrap the awful carbon tax which will not happen.

THE last time Canberra witnessed a major outbreak of butcher paper and textas was during the 2020 Summit, Kevin Rudd's ambitious attempt four years ago to bring together Australia's brightest people and tap them for big ideas.


Actress Cate Blanchett was one of 1002 delegates in 2008 who offered their thoughts. As with many Rudd initiatives, however, the summit went nowhere and delivered nothing.
But that hasn't stopped his successor, Prime Minister Julia Gillard, from giving the butcher paper tactic another belt.
This time Labor's 103 backbench MPs will be asked to come up with policies, ideas and strategies for the coming parliamentary year.
Ms Gillard's 2012 Summit festival will take place on February 5. It promises to be quite an event, despite the apparent cynicism of several backbench Labor MPs who spoke to The Daily Telegraph.
Some, particularly those whose seats are marginal, are naturally concerned about the current direction of polling. If trends continue, many of these MPs face removal from office at the next election.
Their input may be a little on the plaintive side.
One idea that deserves exploring at the 2012 Summit could be that the government return to core business and abandon its previously grandiose approach. With the global economy struggling, now is not the time for any of Labor's elaborate dreams.
Try just running a basic, competent government. You never know. Australia's voters might even like it.
Posted by Baron at 6:13 AM