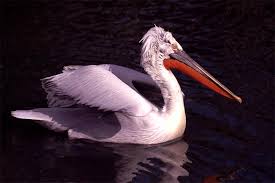 This is not something which will be distributed widely in the warmist press but the current freeze in Europe is causing great damage to the environment,animals and birds. The latest casualties are rare Dalmatian pelicans in Russia which are being hand-fed to help them survive. Imagine the uproar in the MSM if they were being killed by a record heat wave rather than by record cold.


AUTHORITIES in a province in southern Russia are trying to save hundreds of endangered Dalmatian pelicans starving in the Caspian Sea after it froze for the first time in years.
Hundreds of the grey-white birds with curly nape feathers are jostling one another in a rare patch of unfrozen water at a shipyard near the city of Makhachkala, the capital of the southern Russian province of Dagestan.
Dagestan's Nature Protection Ministry spokesman Arslan Dydymov said today that about 20 birds have died of hunger despite hundreds of kilograms of fish that his ministry and a local lawmaker are purchasing daily to feed them.
The birds flew to Makhachkala last week from the frozen deltas of the Volga and Terek rivers up north.
Fewer than 1400 Dalmatian pelicans, the world's largest, live in southern Russia.
Posted by Baron at 10:11 PM