China has played gullible western politicians for fools in firstly getting grants to build new cleaner power stations and then by paying lip-service to green principles with token alternative energy programs. Those programs are dwarfed by the conventional energy generated in China with it's huge power generation building program.The graph below shows how stupid western countries have been in severely damaging their economies for CO2 reductions which would not make a blip on the world's emissions. India also is becoming a major player which will increase emissions even more.

China’s coal use grew 9 percent in 2011, rising to 3.8 billion tons. At this point, the country is burning nearly as much coal as the rest of the world combined.
Coal, of course, is the world’s premier fossil fuel, a low-cost source of electricity that kicks a lot of carbon-dioxide up into the atmosphere. And China’s growing appetite is a big reason why global greenhouse-gas emissions have soared in recent years, even as the United States and Europe have managed to curtail their coal use and cut their carbon pollution.
Posted by Baron at 6:52 PM 1 comment:

Count-down to end of carbon tax

Two opinion polls released today have the Gillard government facing decimation at the forthcoming election due in September this year. As the opposition has campaigned heavily on removal of the carbon tax it will be removed soon after.
The Newspoll has the Coalition with a whopping 56 to 44 lead and the Galaxy poll showing a similar 54 to 46 poll result. 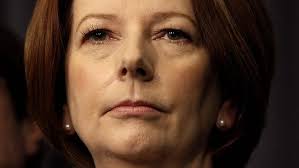 The latest Newspoll survey, which was slightly affected by the number of voters in flood and bushfire-affected areas, is a complete reversal of fortune for the ALP from the summer-holiday affected January poll, and a much-needed personal boost for the Opposition Leader.
The poll puts Labor's primary support at 32 per cent - a wipeout of the six-point gain recorded between December and January - as the Coalition's support rose four percentage points to 48 per cent in the past three weeks.
With the Greens steady on 9 per cent and "others" going from 9 per cent to 11 per cent since the poll in January, the two-party-preferred figure has the Coalition back with a huge election-winning lead of 56 per cent to 44 per cent.
A Galaxy poll published in News Limited newspapers today puts Labor's support at 35 per cent and the Coalition's at 48 per cent. That gives a two-party-preferred lead for the Coalition of 54 per cent to 46 per cent.
Meanwhile a smiling Kevin Rudd is waiting in the wings.

The Scientific American has abandoned any pretense to science and  published an article which can only be described as global warming propaganda about Alaska. Alarmist bed-wetters made Alaska the poster child of alarmism when in the early 2000's it warmed significantly but Alaska has now returned to it's normal freezing condition.


Speaking at a Brookings Institution panel on Arctic Indigenous Peoples, Displacement and Climate Change yesterday in Washington, D.C., Bronen presented a paper on the challenges Alaskan indigenous communities face as they try to move to higher, drier ground. Many of these efforts have been stalled because there is little government support, on both the state and federal level, for the difficult and expensive task of relocating an entire town.
Three communities "have been desperately trying to relocate for decades," she said. "I'm just stunned by how challenging the relocation effort is."
As prior to the last 10 years there was no appreciable nett warming in Alaska it would seem that these communities have been wanting  to move for different reasons which may be valid but certainly not due to global warming. The real story is shown by the graph below conveniently not illustrated in the SA article.