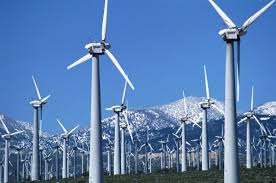 Tim Flannery ,Australia's Climate Commissioner and failed climate prophet has dismissed claims by a nurse treating the complaint of wind farm sickness. Flannery lives on the waterfront after warning people about the impending disaster from rising tides. He is also predicted that our dams would never fill again prior to years of flooding rains .

CLIMATE commissioner Tim Flannery has dismissed concerns about possible health effects from wind farm noise, saying illness may be caused by stress or residents being "sick with envy" at not getting payment for turbines on their properties.
Speaking at a nurses' forum yesterday about the relationship between climate change and health, Professor Flannery fended off a question from a regional Victorian nurse who said she supported wind energy but was seeing many patients with health problems attributed to a nearby wind farm.
"What I've read and experienced is that there are no proven health impacts directly from wind-related noise," Professor Flannery said. "What we do see is people who are adversely affected by it through perhaps stress or tension or worry."
Professor Flannery said he had asked a Canberra man who had leased part of his land for six turbines whether he had seen any health effects from the wind farm.
"He said, 'Yeah mate, people get sick, sick with envy," Professor Flannery said. "He said $60,000 a year (was) coming straight into his farm and people next door can see the turbines every day.
"I'm not saying that's the whole story, by any means, but I think from what I've read the health impacts are more (at) that social level rather than anything caused directly by the noise."
The nurse who asked the question described herself as an environmental activist who had supported plans to build the Hepburn wind farm, a community-owned two-turbine project near Daylesford, northwest of Melbourne.
"As a nurse I experience lots of people around that wind farm having very negative health impacts from it," she said. "In the enthusiasm for bringing in alternative technology, how can we ensure those affected get social justice? Whilst I support wind, I have to say that I don't support the Hepburn wind farm because they failed to address the health issues of those affected by it."
The Coalition has pledged to hold an inquiry into wind farm noise if elected in September, after a Senate committee last year discounted health claims but did not dispute that some people living near turbines felt unwell.
A University of Sydney study released this month concluded wind farm-associated health problems were "communicated" diseases of a psychogenic origin, based on non-physical causes such as fear and anxiety.
The study drew its data on the number of people complaining about health problems from wind farm developers, submissions to government public inquiries and news media articles.
Sarah Laurie, the chief executive of the Waubra Foundation, dedicated to wind farm health issues, said Professor Flannery's comments were "appalling".
"We're talking about families who have been driven out of their homes, we're talking about elderly widows who are unable to sleep in their home," she said.
"I'm disgusted and appalled at his comments and his ignorance."
Professor Flannery said the Climate Commission would produce a report later this year, in conjunction with the Australian Medical Association, on wind farms and their health effects.
A spokeswoman later clarified that the commission "hoped" to produce a report on wind energy, with a section on health.
Posted by Baron at 2:02 PM