"We'll all be rooned," said Hanrahan in accents most forlorn,

Outside the church, ere Mass began one frosty Sunday morn.
The congregation stood about coat-collars to the ears,
And talked of stock, and crops, and drought as it had done for years
."It's looking crook," said Daniel Croke; "Bedad, it's cruke, me lad,
For never since the banks went broke has seasons been so bad."


The Aussie folklore character Hanrahan typifies the gloomy view of
the global warmers with his dismal view of life but in life things are never quite so bad as the doomsayers think.
Munich Re,  the global insurance company with a Hanrahan outlook and which has been blatantly pushing the warmist line has been contradicted by real data showing that normalised  weather disaster losses have been reducing over the last 20 years. Of course Munich Re has  a vested interest in promoting a disaster ridden world using any means to increase premiums and has a natural fit with the global warming lobby. 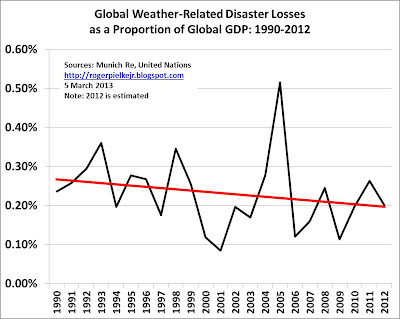 This peer-reviewed data contradicts the propaganda of the Global Warming catastrophists who have switched from global warming which is no longer happening  to weather extremes as the principal scare tactic.
E. Neumayer and F. Barthel. 2011. Normalizing Economic Loss from Natural Disasters: A Global Analysis, Global Environmental Change, 21:13-24 (here in PDF).They conclude: "there is no evidence so far that climate change has increased the normalized economic loss from natural disasters."
NoTricksZone reports that deaths from natural catastrophes dropped 90% in 2012 , a statistic you will probably only read about on skeptics blogs.
According to TAZ, 2012′s “total damages of $160 billion was below the long-term average. And foremost ‘only’ 9500 people died in 2012 from storms, floods and earthquakes - far less than the 106,000 in an average year.” That’s a huge drop of 90%! So all the dramatic stories about deadly weather extremes we’ve been hearing for months was mostly hype.