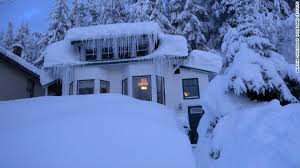 Alaska was touted as the global warming canary when it was warming but over the last few years the cold has returned with a vengeance and the faithful have become very quiet on the subject.


Think spring is well overdue? You’re right. Below average temperatures are lingering over much of Alaska, and upcoming forecasts do not hold the promise of warmer weather anytime soon.
The cold weather is due to the Polar Jet Stream, a fast flowing air current cascading off the North Pole and Arctic Ocean, that is pushing cold, dry air over large parts of Alaska, causing below normal temperatures for much of the state, the National Weather Service writes on its Facebook page.
“In some cases, daytime highs are running close to 10-20ºF below normal.” NWS writes.
And that’s not all … The NWS’s Climate Prediction Center is forecasting continued chilly temperatures well below normal temperatures for the next 8 to 14 days. The prolonged cold is due to high pressure over the Bering Sea that is preventing the weather pattern from shifting, NWS writes.
Elsewhere in the Northern Hemisphere the news is no better with spring temperatures way below normal.
A remarkably frigid spring is putting the freeze on global warming from Russia to the U.K. and from Alaska to Florida.The Russian International News Agency reports the exceptionally cold spring, even by Russian standards, is delaying the annual bird migration. The U.K. Guardian reports record cold temperatures killed thousands of newborn lambs throughout the British Isles. The Alaska Dispatch saluted residents with “Welcome to Spring!” while reporting temperatures remaining below zero and threatening longtime records. The Tampa Bay Times reported an extended spell of frigid temperatures forced animal experts to rescue a South Florida manatee at a time when Floridians are usually basking on beach sands. The Real Science climate blog noted there were 30 times more cold temperature records set in the United States this week than warm temperature records. NASA satellite instruments reported February 2013 temperatures that were approximately average compared to the past dozen years, a time period during which global temperatures have plateaued. Temperatures have plateaued even though annual global carbon dioxide emissions have risen by approximately one-third since the year 2000
We may not hear too much warmist bleating about early springs for a while.
Posted by Baron at 11:56 AM