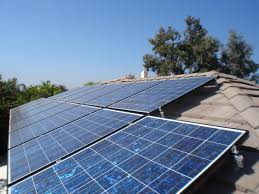 Research by the Electricity Supply Association has shown that the rip-off-your-neighbour solar scheme is costing those long-suffering neighbours over 1 billion dollars a year. As well as receiving a ridiculously high feed-in tariff for solar power, panel owners also avoid a large share of network costs.


SOLAR panels are costing those without them more than $1 billion a year.
New research by the Energy Supply Association of Australia reveals that the one million households with solar panels are avoiding network charges of $340 million a year - and rising.
The ESAA analysis has also found that "feed-in-tariff'' (FiT) schemes are adding $680 million a year.
In both instances, these costs are predominantly met by households that have not been able to afford to install solar.
Reflecting this, academics' research for AGL has argued that the rage in rooftop installations has delivered the greatest benefit to wealthier households - at the expense of the poorest.
While the flaws in many states' feed-in tariffs have become well-known, the ESAA says in a new discussion paper that the $340 million impost relating to avoided network charges is a "hidden cost''.
It is currently adding $30 a year to others' bills, but this could surge to $300 a year over the next decade.
"Because solar customers generate their own electricity when the sun shines, they take less from the grid. Under the current tariff setup, this means they pay a lot less, even though they may cost the network more than non-solar customers,'' the ESAA discussion paper says.
"Unless we find a fairer way to charge for our networks, households without solar will be paying even more in network charges in the years ahead.''
To support its argument the ESAA uses an example of a hypothetical household that installs a 4 kilowatt rooftop system. This household's network charge falls from $464 to $178 - a drop of 62 per cent.
But, the ESAA says, "the costs of providing the network are mostly the same or even more expensive as a result of rooftop solar energy''.
"To recover the real costs of operating the grid, network businesses adjust their charges so those without solar pay higher power bills.''