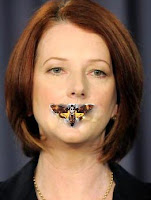 Climate change has become a to-be-avoided-at-all-costs issue in the Labor campaign and has gone from the "greatest moral challenge" in 2007 to be completely unmentioned in the 2013 Labor budget.
Ex-treasurer Peter Costello in his inimitable style has the story about the dog that did not bark!

IN the Sherlock Holmes mystery Silver Blaze there is the curious incident of a dog that didn't bark in the night. Sherlock Holmes realises this is the key to the crime and solves the mystery. The guard dog didn't bark because it knew the intruder.
Sometimes in politics we focus too much on what people say and not enough on what they don't say. In this month's Budget speech there was the curious case of the dog that didn't bark. Wayne Swan had no section on climate change.
It was not always thus.
In his first Budget speech, Swan had a whole section headed "Tackling Climate Change" and announced "Measures totalling $2.3 billion over five years to help reduce Australia's greenhouse emissions, adapt to climate change, and ensure we show global leadership in the transition to a low emissions economy".
Those five years are now just coming to an end. You can judge for yourself how successful we were in our global leadership. But I think it is now fair to say we didn't get too much for that $2.3 billion or the many more billions that were poured in after that.
To be honest, I am sensitive on this point. Year after year when I presented a budget, the opposition would complain that I never mentioned, let alone did anything about, climate change. So in my last budget I announced funding on things like solar panels and forests in developing countries. Labor claimed it was too little too late and increased funding tenfold the next year!
I guess if the future of humanity is at stake no amount of money is too much. Kevin Rudd said climate change was "the greatest moral and economic challenge of our generation".
And so it was for a while. Rudd poured enormous resources into his emissions trading scheme right up until the time he dropped it in 2010. The Labor Party dropped him soon after.
His successor Ms Gillard went one further and introduced a carbon tax despite promising there would be no carbon tax under any government she led. It would be nit-picking to say that keeping a promise is more important than saving the planet.
The object of the carbon tax is to make high energy users pay more for electricity from coal-fired power stations. Eventually, as the cost rises, they will stop using it. This policy could be on the verge of working.
The Ford motor car company will be closing in Geelong in 2016 and Alcoa's aluminium smelter (also in Geelong) is reviewing its operations.
The closure of Ford and Alcoa would make a large reduction in our carbon emissions. The Greens should be happy about that.
I have looked carefully and been unable to find any statement where they welcome it. They should. It is evidence that their policies are working.
Perhaps they think it is better to go quiet when people are losing their jobs. But when the future of the planet is at stake what are a few dirty-carbon-pollution-creating jobs to stand in the way?
Another thought has occurred to me: the faith of the global warming movement is not as fervent as it used to be. Aid agencies were forecasting there would be millions of refugees leaving their sinking islands. Councils were banning development near the coast where seas were thought to be rising.
Our climate change ambassadors like Tim Flannery were prophesying that the dams would never fill again.
We can't expect those who derive their income in the Church of the Global Warming movement to give up the faith, but I have detected creeping doubt within the federal government.
The Department of Climate Change has been abolished, some green schemes are being wound down, and some such as the "cash for clunkers" never got started. Mr Swan's recent Budget disclosed the rate of the carbon tax is going to collapse in two years time. The government doesn't seem perturbed by this. We will give up punishing our industry more than comparable countries around the world. Instead of leading the world, we will follow it.
But won't this lead to the melting of the Himalayan ice cap? Doesn't this mean the extinction of the polar bear?
Apparently not. Apparently, the federal government thinks things are not nearly as desperate as they once wanted us to believe.
Well, if a radical cut in the carbon tax is OK in two years time, why not cut it now? And why have it in the first place? And how come we are phasing out spending on programs that were once necessary to save the planet? It's starting to give me a queasy suspicion that these schemes weren't necessary in the first place.
When a dog fails to bark in the night it might be telling you something. It might be telling you that the danger is not as real as you once imagined.
Climate change was the dog that didn't bark in the Budget. If that dog had barked it would have raised uncomfortable questions that our government just doesn't want to answer.