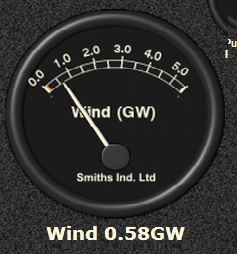 What does a multi-billion dollar investment in wind power get you? Currently 8.5 Gigawatts of installed capacity in the UK is producing at this moment , a paltry .6 Gigawatt of "free power" or 2% of demand. Of course base-load coal and nuclear is producing most of the remaining 98%. The actual wind power may be a little higher as some of the farms are not metered on the national grid but these results are still a staggering indictment of a government's failure to apply basic economics to green power. Of course I will be accused of cherry-picking a particular time of day so let us examine the whole day:

Or maybe the last week:

Warmist Joe Romm  eulogises wind power and equates nameplate capacity to the number of homes to be supplied ignoring the reality of miserable load factors ,poor availability and non-performance in critically cold conditions.

A total of €2.8bn has been invested in wind farms, a staggering sum by any standards. In 2011 alone the investment figure was €372m. A further €4bn is expected over the next eight years to meet domestic targets alone.
Wind is now no longer a niche product across Europe where wind capacity 23 times the national demand of Ireland has been installed. Last year wind energy accounted for more than 15pc of our electricity demand. Wind energy also has the capability to supply 1.3 million homes in Ireland.

In the UK, wind power has topped 5 gigawatts per day and is sufficient to power 10% of total electricity demand.
It is amazing that in the UK where tourism is such an important industry that they are still allowing construction of ugly turbines across the pristine country-side that tourists love. Even the Guardian is now question the defacing of the English countryside.

The British countryside is facing little short of visual disaster. "Plans" to increase the present 2,000 onshore wind turbines to treble that number were blown apart when farmers realised they could get an average £40,000 a year in grants and tariffs per turbine, plus "compensation" even when the wind did not blow. Some landowners have realised £40m-£60m from just letting their land be used. This has become a far greater racket even than the Common Market subsidies of 30 years ago – and entirely the creation of the British Treasury.
The landscape effect is hard to imagine. An inquiry opened this week in Welshpool into 800 turbines, many the height of the London Eye, covering 600 square miles of the Welsh hills in Powys. This lovely country was denied protected status by pressure from the same landowners who will now make millions from the turbines. The footprint would render most of the Cambrian uplands a linear industrial park, with associated quarries, roads and infrastructure.
Equally staggering is an application this month for 240 giant turbines to form a visual wall in the middle of the Bristol Channel between Exmoor and the Gower peninsular. No other civilised nation would allow such desecration of its loveliest estuary. None of these schemes generate as much reliable energy as a single power station.


Although more questions are now being asked this government-funded eco-lunacy is still continuing all over the world  and in the US the Nitwit-in-Chief Obama has announced he will ramp up economy-destroying green power policies bypassing the congress.