The Conversation ,an Australian left-wing university blog funded by the Labor government was formed to promote articles by academics and stimulate discussion on a wide range of topics as long as that discussion is "on topic" which means usually toeing the leftist line. The latest article is on communicating climate change :

In a recently-released paper looking at how people visualise climate change, Saffron O’Neill at University of Exeter joined other researchers in the UK, US and Australia, to see how people engaged with climate change images drawn from mass media sources in those countries.
They investigated responses to images ranging from icons of nature, such as coral reefs, snowstorms, bushfires, cracked ground and ice sheets to human made phenomena, such as wind farms, traffic jams, low reservoirs, smoke-stacks, and fuel pumps and then images of political leaders.
For each image they wanted to measure:
1) “salience” – whether it raised the importance of climate change
2) empowerment or “self-efficacy” – the sense of being able to take any action on climate change.
My comments below on the article lasted only microseconds before they were removed as breaching Conversation "standards" or "off topic" - I don't know which.
There are major problems in communicating climate change hysteria because most of the old scary things used in the past have been proved false. The polar bears are increasing in number according to rangers.
http://online.wsj.com/article/SB10001424127887323452204578288343627282034.html
Global warming as defined by global temperature has stalled and is on the decline.
Sea ice is breaking all-time records in Antarctica and there has been a huge rebound in summer ice in the Arctic with the shortest Arctic ice melt on record.
http://ocean.dmi.dk/arctic/plots/icecover/icecover_current.png
http://ocean.dmi.dk/arctic/plots/meanTarchive/meanT_2013.png
Since alarmists now have to resort to "hidden" effects such as the so-called deep ocean heating and antarctic ice somehow melting in the deep these do not lend themselves to sexy images.
Pictures of horrendous snowy winters in the Northern Hemisphere don't work well and pictures of corn crops in trouble are few and far between with the record harvests this year.


It is probably best to carry on and make things up as usual.
Posted by Baron at 1:15 PM 2 comments:

Obama is exhausted from trying to cover up the Benghazi scandal where the US ambassador lost his life while appealing for help that was not forthcoming and the poor man badly needed a holiday. After informing everyone of his total commitment to reducing global emissions and curb global warming Obama thoughtfully provided a separate jet to transport the pooch-in-chief to the holiday destination. Not surprisingly comment was swift and this gem was from Real Science.

Australia has a lesson to learn from Europe as more and more of our precious resources are ploughed into useless feel-good projects. The following important review of green energy in Europe is reprinted in full.

From the Australian and Benny Peiser
As country after country abandons, curtails or reneges on once-generous support for renewable energy, Europe is beginning to realize that its green energy strategy is dying on the vine. Green dreams are giving way to hard economic realities. Recycling alive and well in Oz

With a recycled Prime Minister Kevin Rudd in power with a recycled Labor premier Bob Carr as Foreign Minister Peter Beattie , former Queensland premier has been resurrected in a desperate move by the Rudd election machine. However the voters in the electorate have already indicated their disapproval in a poll following the appointment. Cartoonist Larry Pickering has the story:

Meanwhile the Courier Mail is also not flattering with it's front page on the appointment.

It seems that one of the shortest summer Arctic ice melts on record is over with the temperature dropping precipitously below zero weeks earlier than normal. With the desperate warmist "scientists" blaming recent freezing Northern Hemisphere winters on reduced arctic ice it will be interesting to see their theories as the arctic ice returns. Is the corollary of their theory that we should expect milder winters?

The Mother Country is in deep financial strife already and by the looks it is going to get worse with further government incompetence.
UK offshore wind developers will get triple the market price for electricity from a mentally challenged UK government for a renewable energy program to cost UK consumers $11.6 billion dollars a year when the schemes are finally implemented.  The poor will be hardest hit while land-owners will get great returns from disfiguring the landscape with bird-destroying windmills. 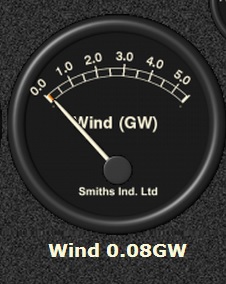 To show what a great investment they are making this is the UK metered wind generation yesterday after billions of dollars of investment. What do you think will happen  when the UK goes to 100% renewables?
Posted by Baron at 9:31 AM 1 comment:

How a real leader takes his wife to a warzone!

Kevin Rudd knows how important he is and keeps telling us so. It is not surprising that when he visited Afghanistan that he protected himself with a flak jacket and helmet but his wife is obviously not as important and doesn't rate the same armor. Good on you Kev! With the alarmists trying to cope with the cessation of global warming for nearly 2 decades ,the Arctic seems ready to deal another body blow to their failed theories. Arctic temperatures are much lower than previous summers and the melt period looks to be on track to be about half normal.
Cryosphere  shows that Arctic ice area already increasing already but that may be just a blip. Time will tell. 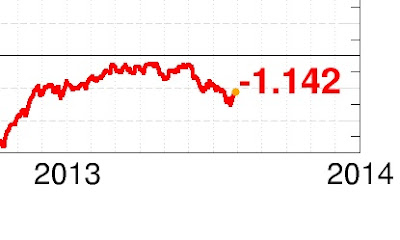