UK wind energy for the last 24 hours has been just over 2% of the total generation and about 12% of nameplate capacity. Only idiots could believe that wind can supply reliable energy to an electricity grid. This meager generation total is despite the billions spent and huge subsidies to the green carpetbaggers. 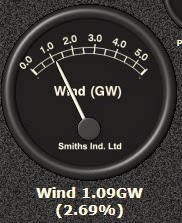 Gordon Hughes of the Edinburgh School of economics delivers a sober message on what renewable energy is doing to energy prices. Of course it will be the poor to suffer as the wealthy can easily absorb the increase in costs.
Stripping away the complexity, the net effect of subsidies for renewables and taxes on CO2 emissions is to offer an average price for electricity generated from the main sources of renewable energy - wind and wood chips - that is at least double the equivalent pool price of electricity which is determined by the cost of running gas-fired generating plants. The incentive is somewhat lower for new plants but the margin is sufficient to sustain long term costs of wind and wood generation that are 60-80% higher than for the most efficient gas plants. The cost differentials are much greater for offshore wind (at least 150%) and solar photovoltaic panels.
To meet 2020 targets for renewable energy, the share of renewables in total electricity production will increase to three times its level in 2012-13 and the share of renewables in electricity, heat and transport will increase to nearly four times its level in 2012-13. Since this growth can only be achieved by relying upon increasingly expensive sources, the targets mean energy costs will increase by at least 3% per year on top of inflation. In practice, the effective increase may be significantly higher than this estimate.
Of course major damage to the economy in doubling energy costs is seen in a loss of competitiveness and migration of energy-intensive industries to countries with low cost energy. The sun has set on the British empire and it will surely set on the Mother country itself unless current energy policies change.
Posted by Baron at 6:28 PM