A good friend of mine who is a true believer has informed me that he gets his global warming science from Dr Karl who has an ABC radio program and who also writes articles for the ABC . Giving the doctor his due he answers questions on many scientific questions well and it seems that only when he gets into the global warming area that science goes out  the window and is replaced by the global warming catechism.
His latest foray on the subject should be titled Dr Karl's Great Moments in Nonsense it is so bad. In it he joins the warmist world in it's desperate attempts to keep their failed theory alive after nearly 20 years of no warming. He accuses skeptics talking about the "global warming pause" of cherry picking facts. He then does some extraordinary cherry picking himself.

Claim 1: Two bodies, the Royal Society and the US National Academy of Sciences, warned that "climate change is more certain than ever."
Their accurate data shows that the climate, as measured by surface temperature of air and water, is still getting hotter.
There are four major global temperature data sets all showing Dr Karl has got it wrong.

The most accurate record is the RSS satellite data showing 18 years of no warming and even the massively tampered GISS record shows a 10 year flat record.
Claim 2.
There are other indicators that inform us about the state of the global climate.
They include the volume of the Arctic sea ice (which has been shrinking), snow in the Northern Hemisphere (also shrinking) and glaciers (more shrinking).
Arctic ice records from satellites only go back to 1979 when it was at a high level due to global cooling and it is true that Arctic ice has been cyclically shrinking since then. Dr Karl neglects to mention there was a lot less ice in the seventies than now. He also neglects to mention the huge recovery of Arctic ice this year increasing a whopping 64% from 2012. He also does not mention the all-time record high for Antarctic sea ice this year. Northern Hemisphere snow cover seems not to be shrinking.

And if you are a skier you would love this last decade looking at NH winter snow increasing at a great rate. 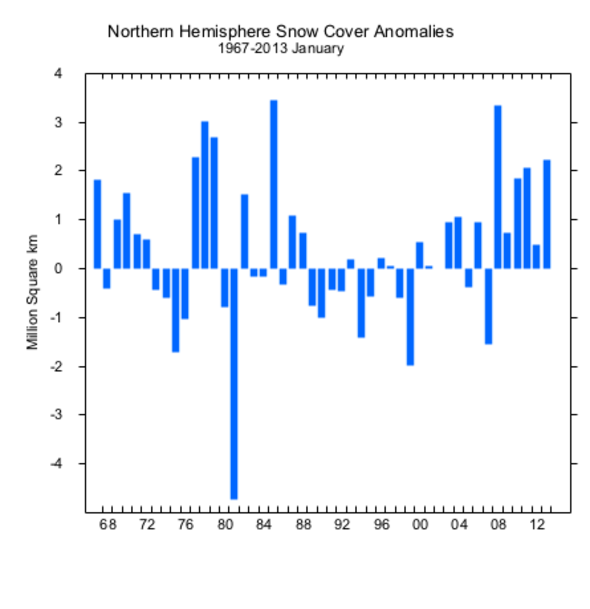 Claim 3
In the oceans we measure the sea level (which has been rising as an accelerating rate).
We can simply check our own Brisbane Bar tide gauge showing very little sea level rise. 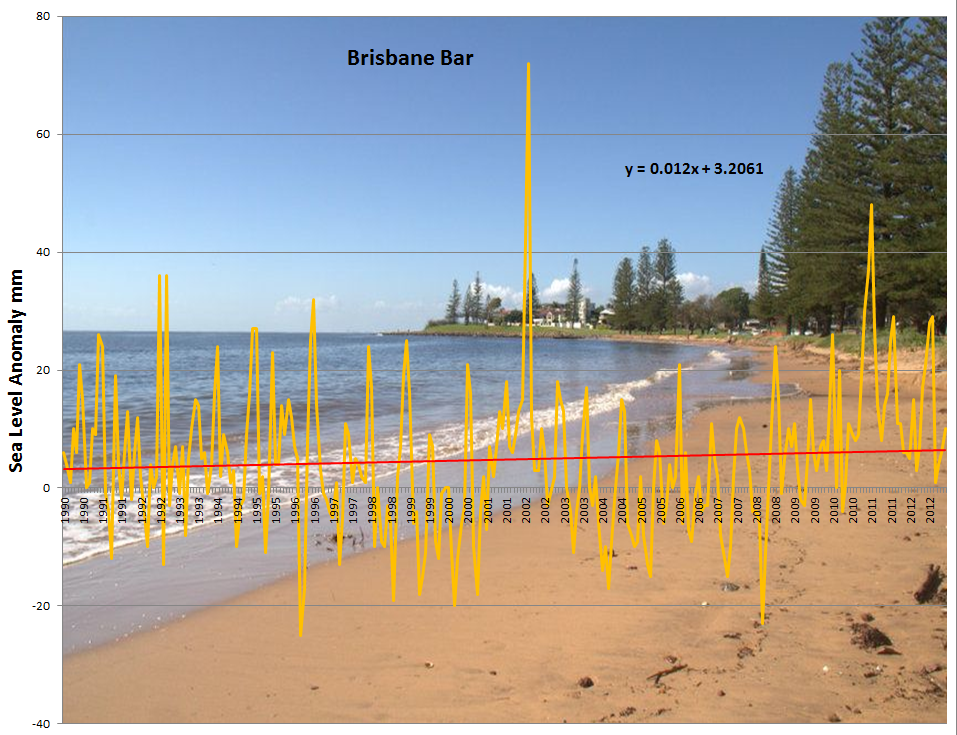 
In summary it would seem that the good Doctor Karl has been doing some cherry-picking himself !
Posted by Baron at 11:45 AM