Goebbels would be proud! 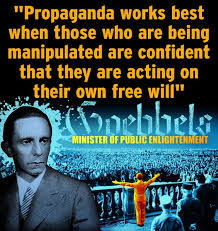 “If you tell a lie big enough and keep repeating it, people will eventually come to believe it.  .” Joseph Goebbels
The propaganda department at Climate Change Central has gone into overdrive as climate data, including a massive jump in Arctic sea ice ,record Antarctic sea ice and a cooling globe increasingly contradicts their failed theory.
With a 64% increase this year  in Arctic summer ice over 2012 the same old "Arctic death spiral" story has been re-released with the date moved forward from 2013 completely ignoring 2014 data.
“The Arctic ice cap is in a death spiral,” said Peter Wadhams, professor of ocean physics at Cambridge University. He has just returned from a research voyage in which the thickness of Arctic sea ice was measured by sending a mini-submarine under the floes.
Remember this from the "settled science department":

Meanwhile AAP releases the days-old fraudulent "hottest August ever" story already covered here but picked up uncritically in the main stream media including the Australian.