Tim"the dams will never be full" Flannery and his cohorts lost their cushy jobs at the Climate Commission when Tony Abbott closed it down. Given such an abysmal and embarrassing record as global warming prophet a lesser man than Tim would give up at that point but he returns to the fray with more outlandish predictions about rising sea levels.
From the Australian:
MORE than $226 billion of properties, roads and rail lines on the Australian coast could be at risk from rising sea levels and associated storm surges if climate change produces a sea level rise of about 1m.

A report by the Climate Council, to be released today, warns that sea levels are expected to rise between 0.4m and 1m over the next century and that coastal flooding risks roughly treble with every 0.1m rise.
In the real world a  quick fact-check on the tide gauge at Sydney's Botany Bay shows levels actually falling over the last 12 years . 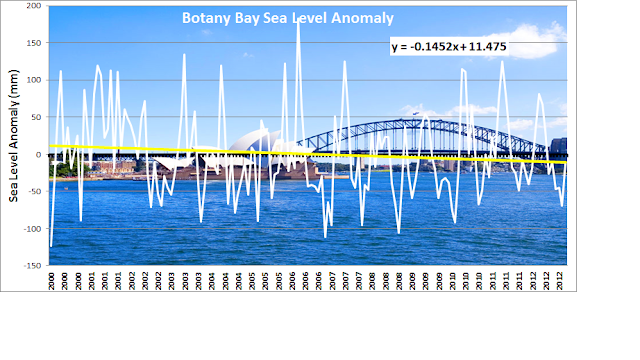