Australia goes over to the dark side

After two refreshing  years with a  sceptic Prime Minister Australia is sliding into the Warmist camp following the election of Malcolm Turnbull. There will be no more investigations of data tampering at the BOM and I hate to see what we are going to agree to in Paris .
Jennifer Mahorasy has a fine article in the Australian which is reproduced in full here.

Hottest Year in the US? NOAA is not broadcasting their accurate data showing cooling! The USCRN network was set up in the US to provide an accurate temperature record which requires almost no adjustment. Unfortunately for the global warming catastrophists the results show cooling over the last 10 years which is not the news required for the doom-and-gloom December meeting in Paris. They are definitely not interested in accurate data.
The U.S. Climate Reference Network (USCRN) is a system of climate observing stations developed by the National Oceanic and Atmospheric Administration (NOAA). The USCRN's primary goal is to provide long-term temperature, precipitation, and soil moisture and temperature observations that are of high quality and are taken in stable settings.
Data from the USCRN are used in a variety of climate monitoring and research activities that include placing current climate anomalies into an historical perspective. The USCRN provides the United States with a reference network that meets the requirements of the Global Climate Observing System (GCOS). The network consists of 114 commissioned stations in the contiguous United States, 16 stations in Alaska (with a plan to eventually have a total of 29), and 2 stations in Hawaii.
The USCRN Program Manager is Howard Diamond. The program is managed and coordinated by the National Centers for Environmental Information, a component of NOAA's National Environmental Satellite, Data, and Information Service (NESDIS).

When we compare this with the RSS satellite temperatures for the US for the same period we get an almost identical graph confirming the accuracy of the RSS data. The RSS data is also showing cooling. Note the RSS data is in Celsius but can't be compared in magnitude as it is measuring the lower troposphere . 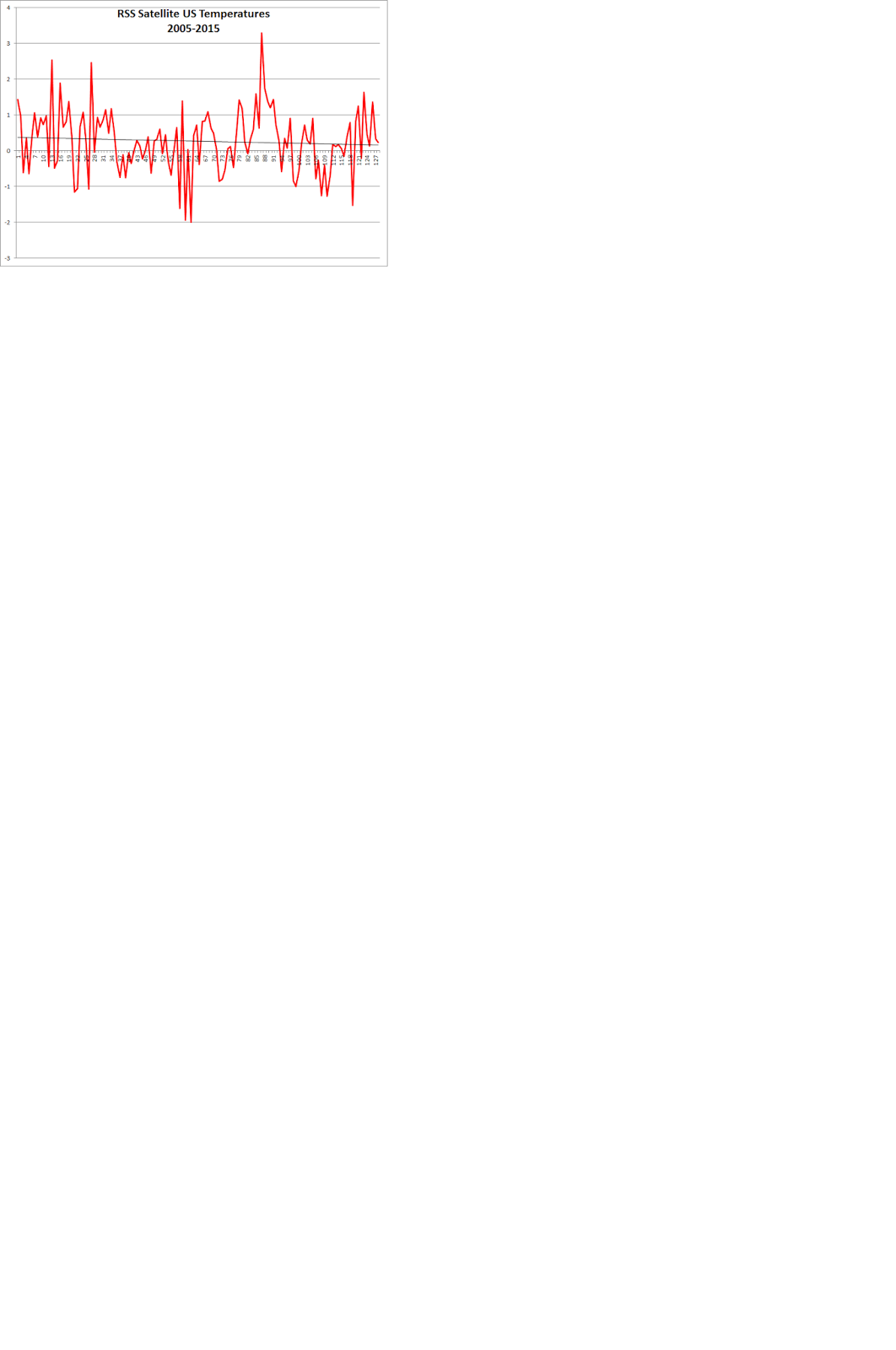 Windmills instead of food

David Cameron says that the UK will spend more that 5 billion pounds on climate change in poor countries but the amount will be deducted from the UK's foreign aid budget. How blessed will the starving peasants feel when their brand new wind turbine arrives instead of a ship load of food.
Posted by Baron at 6:29 AM 8 comments:

This man , elected by a bunch of geriatrics in Rome fancies himself as a world politician and science expert as he traipses around the world in his Dopemobile. He is in good company when in the US he joins with the Moron-in-Chief to promote the global warming scam and other liberal causes.
Pope Francis has built up a liberal fan club with his encyclical against global warming, the recognition of Palestinian statehood and an attack on unfettered capitalism (“the dung of the devil”).
The Pope should be concentrating on his own back yard where up to 5% of his priests are involved in child abuse and children are not safe in the church. "Suffer the little children to come unto me" takes on a whole new meaning with his lot.
Meanwhile the Catholic Church he heads , with its billions in wealth ,sees no need to distribute it's amassed riches among the world's poorest as the money-changers that Christ chased from the temple are back in force still running around in funny medieval costumes . Makes one wonder where the "dung of the devil" really reside!
Posted by Baron at 12:45 PM 2 comments:

We all knew it was coming but it is still astounding that the climate "scientists" at NOAA could be so blatant in lying about global temperatures in the lead-up to the Climate conference in December. With much of Eastern Australia having the coldest July in decades according to the BOM NOAA reports it as "much above average". Andrew Bolt has the story:

There is something very odd about the NOAA claim of a very hot July, thanks to global warming:

July was the hottest month on Earth since records began...

Take the NOAA map above. Check Australia, said to have had average or above-average temperatures over much of the continent, apart from the much-warmer-than-average bits around Sydney and parts of Western Australia.
Liberal MP Craig Kelly is curious:

HOW DOES THE COLDEST MONTH IN 20 YEARS BECOME THE HOTTEST MONTH “EVER’’ ?
July in Melbourne was widely reported as the ”Coldest July in 20 years”
It also was reported at the start of August that Sydney had just “notched its longest cold spell in 26 years” and it was also “the coolest July for the city since 2002”
Even our Bureau of Meteorology reported; ”Temperatures were below average across Sydney during July”
However, have close look at the below map produced by the National Oceanic and Atmospheric Administration (NOAA) an Obama Government agency (the same people that assert that July 2015 was the hottest month ever).
NOAA assert that temperatures in Melbourne for July 2015 were “Warmer than Average” and for Sydney they were “Much warmer than average”.
Can anyone explain this ?

Or take Adelaide, which the NOAA map claims had average temperatures.
In fact:

Bureau of Meteorology Senior Forecaster Mark Anolack said ... “July certainly was cooler than average… Generally around Adelaide we have about 15.3 degrees (Celsius) as an average maximum temperature.
“This year, it was a little bit cooler with 14.6 degrees, and that was actually our coldest July since July 1997.”

Brisbane was said by NOAA to be about average. In fact:

Brisbane‘s average monthly maximum in July was 18.1, considerably cooler than the usual 18.9.

NOAA says Perth had a well-above-average temperatures for July. In fact, our Bureau of Meteorology says it was not quite that warm:

Perth was slightly above average with an average maximum of 18.7 as against the usual 18.4

Why is the NOAA map for Australia running so very warm?
UPDATE
Reader Ian notes that NOAA’s map of temperatures for July is very different to the cool one from our own Bureau of Meterology: