With the Paris Climate boondoggle ready to start NASA has all it's ducks in a row with final data tampering completed. They have even managed to erase the "pause" which is accepted by scientists around the world. Real Science has the story:

Somehow, they managed to calculate Earth’s temperature within 0.01 degrees – even though they had no temperature data for about half of the land surface, including none in Greenland and very little in Africa or Antarctica.

This kind of mind-blowing malfeasance would get them fired and probably escorted out of the building by security at many engineering companies.
Satellites cover almost the entire planet several times a day, and they showed that October had only the 25th highest monthly anomaly, and that the first ten months of 1998 all had a higher anomaly than October 2015.

Not only do NASA and NOAA make up fake data for much of the planet, but they massively tamper with their existing data, like this station in Siberia where they have cooled the past nearly two degrees C since 2012 – and now claim that it is two degrees C above normal.

The graph below shows the magnitude of their data tampering since 2012.

By tampering with the station baseline, they created the large anomalies. Then they double down their fraud by smearing their bogus anomalies across 1200 km of missing data. This is needed to create their required fraudulent record temperature claims ahead of Paris.

This address by Patrick Moore , founder and leader of Greenpeace for decades is a must read for anyone wanting to understand the real effect of CO2 in our lives . The feral activists that control Greenpeace now bear no resemblance to it's founder and have completely lost sight of the noble goals it once espoused.


There is certainty beyond any doubt that CO2 is the building block for all life on Earth and that without its presence in the global atmosphere at a sufficient concentration this would be a dead planet. Yet today our children and our publics are taught that CO2 is a toxic pollutant that will destroy life and bring civilization to its knees. Tonight I hope to turn this dangerous human-caused propaganda on its head. Tonight I will demonstrate that human emissions of CO2 have already saved life on our planet from a very untimely end. That in the absence of our emitting some of the carbon back into the atmosphere from whence it came in the first place, most or perhaps all life on Earth would begin to die less than two million years from today.
Posted by Baron at 8:10 AM 10 comments:

Arctic ice area is currently at a ten year high much to the dismay of the climate doomsters who keep predicting it will disappear. This is not a good message for the scammers conference in Paris. 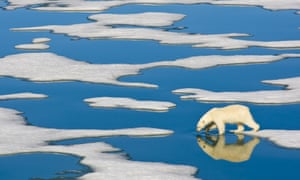